Ulls del món > Interviews > Nicolás Cortés, director of the Cooperation and Solidarity Programme of the City Council of L’Hospitalet
CATCH-UP

Nicolás Cortés, director of the Cooperation and Solidarity Programme of the City Council of L’Hospitalet 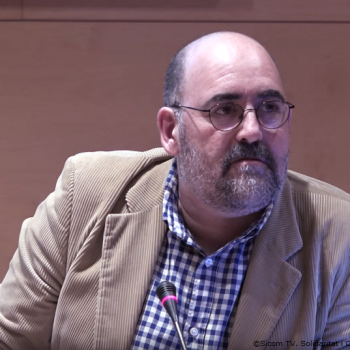 Name: Nicolás Cortés
Age: 53
Profession: Director of the Cooperation and Solidarity Programme of the City Council of L'Hospitalet
I was born in: L'Hospitalet de Llobregat
I am in touch with Eyes of the world since: 2004

Nicolás Cortés is a historian (specifically a historian of Africa) who has worked in the field of international cooperation since 1994, when he started working in trade unions and NGOs. Afterwards, he started his professional work at the City Council of L’Hospitalet de Llobegrat as the councilman of Cooperation, and is now the director of the Cooperation and Solidarity Programme.

How have you assisted in the countries that you have visited?

I have had two roles: one as a voluntary aid worker and the other as a professional. As a volunteer, I have given union training classes in the north of Morocco, in Cuba, in Peru… There I explained topics surrounding basic job training and was concerned with the state of the production systems.

Has having studied Africa’s history in depth allowed you to demystify false stereotypes about the continent?

The first thing that should be made clear when speaking about Africa is that there is not only one – there are many Africas. This must be put in perspective, because it is not all the same in the north, the most predominantly Arab area, where the Maghreb is one thing and Egypt is another, or in the western part of the continent, where there are currently very democratic countries that continue to gradually advance. It is not the same either in southern Africa, which is very developed.

It is true that some cultural elements have prevented them from developing at our level, although the lethal impact that European colonization had and the impact that China is currently having must be kept in mind.

Africa and Europe have a responsibility to get along, because they are neighbours. It is absolutely necessary to cooperate with Africa at the economic and technological level.

As an expert in international cooperation, what do you think is the best way to achieve the 17 Sustainable Development Goals and reduce the existing inequalities in certain parts of the world?

The first thing that must be done is to display it so that the public knows about the goals and that the states have signed an agreement. It is imperative that citizens are aware of this so they then put pressure on their governments to comply with their obligations.

We are talking about concrete realities, we are not talking about utopias that lead us to a better world. Now it is about survival. Therefore, the sustainable development goals must be present in any space of government and compliance must be demanded.

Do you think that all municipal institutions should have areas like the one you direct (providing aid to countries with less resources)?

I think that in a public administration, the moment you have officials working on an issue, that’s when the project has a future. Until you see that there is a person in charge who has a team in their care, you cannot guarantee that a project is going to be initiated.

Another factor is money, the economic team. In L’Hospitalet, since 1989, we have had a concrete economic team for cooperation, that has grown over time.

For 15 years the City Council of L’Hospitalet has given economic support to the projects of Eyes of the world in Bolivia, Sahara, and Mali. Did you know about the problems related to eye health in these countries before?

We knew about the situation of health poverty, but we had no record of the ophthalmological situation. We did not know that in the Sahara there were specific vision problems related with age and the desert. For us, talking with Eyes of the world has allowed us to open up a new perspective that we did not know about before. Generally, when you talk about health you are referring to pandemics, water purification, but you never stop to think about something as simple, but at the same time so complex, as vision. I suppose that it has enriched you to work with us, but to us as a City Council even more.

What is your opinion of the work that Eyes of the world does?

Very positive, because in your case the volunteering that people do is priceless, since first-rate specialists do it. That you rely on ophthalmologists, the most expensive doctors that there can be, and that you also train local staff is a very important achievement as an organization. In the world of cooperation, everyone is presumed to have goodwill, but what is needed above all is technically sound people. This is one of the main returns you have as an organization: to have first-rate professionals involved in volunteering.

What three words would you use to define the Foundation?

Effectiveness, hope, and quality of life.