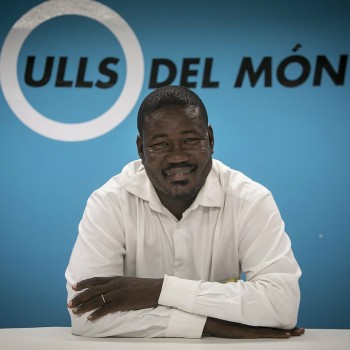 Name: Albert Coulibaly
Age: 47
Profession: Coordinator of the Eyes of Mali project
I was born in: Abidjan (Ivory Coast)
I am in touch with Eyes of the world since: 2008

He has been eight years collaborating with Eyes of the world in Mali, where he coordinates a program for the prevention and treatment of eye pathologies through which more than75.000 patients have been attended and more than 5.000 surgeries for cataracts, trachoma/trichiasis, glaucoma, refractive defects and presbyopia have been performed. These are the most usual problems found by doctor Albert Coulibaly in this African country.

You collaborate with Eyes of the world since its foundation, in 2008. How did you get in touch with the entity?

I contacted the Eyes of the world Foundation through the head of mission of Doctors Without Borders/Luxembourg in Mali. I had already worked for some years in this field (ocular illness and fight against cholera) in a significant part of the country. And the Foundation wanted to carry out an exploration mission on the ground.

As coordinator of Eyes of Mali, which are the main visual issues that the inhabitants face?

People face mainly the following eye problems: cataracts, trachoma/trichiasis, glaucoma, refractive defects and presbyopia. These issues are aggravated by the ignorance of people, the financial barrier and the lack of qualified personnel in ophthalmology and appropriate equipment.

You were in Barcelona not long ago to evaluate the program Eyes of Mali and to propose new challenges. How is advancing the project?

The program is progressing very well. I would like to highlight that the posterior segment diseases are treated effectively in the IOTA, which is today a reference in the retina treatment for the Franco-African countries, and this is thanks to the work developed by Eyes of the world. I would also like to highlight the fact that eye care has been included in the minimum package of services given by different sanitary districts. All our partners have expressed repeatedly their firm decision of keeping these activities. They even want it to be extended to other cities, as it has been done and continues in the sanitary area of Bankass. However, in this 2016, the determination of the Foundation is even more significant.

A few months ago Eyes of the world decided to install a small workshop to provide affordable glasses to the population. At which point is this initiative?

The optical workshop is not operative yet in Bankass. The materials and equipment arrived in Bamako and soon will be sent to the Health Reference Center in the district of Bankass. The site is being built with the support of the funds of the Council of Circle of Reference Center and the National Agency of Territorial Collectivity Investments. The optician that will be trained during six months in the IOTA of Bamako, with the resources of the Foundation, has already been selected by our partners.

More than 75.000 patients attended and more than 5.000 surgeries. These figures speak about hope and progress

Yes, no doubt. I would like to remember a phrase that an ophthalmologist told us once, “Eyes of the world has done more than other international organizations that have been previously in Mali”. We have to remember that the same ophthalmologist had been working in some of these organizations. However, this must not make us forget that there is still a lot to do in the Mopti region and in Mali.

Which are the projects of Eyes of Mali for the next years?

In the coming years, Eyes of the world will leave the Bankass district to work in other areas of the Mopti region and even in other regions of the country. We are evaluating the possibility of working in the districts of Tenekou and Djene, and even doing it in Youwarou, where ophthalmic surgery has not been performed for several years.