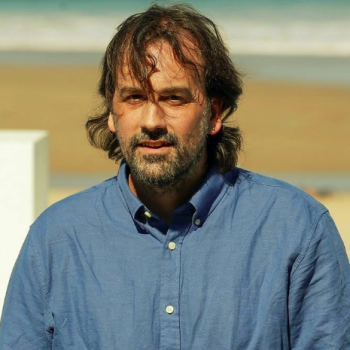 Name: Isaki Lacuesta
Age: 43
Profession: Film director
I was born in: Girona
I am in touch with Eyes of the world since: 2009

Isaki Lacuesta, acclaimed Spanish director who works in documentaries, feature films and video art, author of critically acclaimed films as The Legend of Time, The Double Steps, The Next Skin and Between Two Waters, has collaborated as a volunteer in the testimonials for our foundation’s 500,000 + 500,000 campaign.

Luckily, happiness doesn’t depend upon the awards. However, I’m very grateful, because they help giving more visibility to my films. It’s beautiful to know that people like what you do, that you’re doing good.

Do you feel more responsible now when starting a project? Could you talk about your ongoing projects?

I guess that this feeling of responsibility depends more on your degree of self-commitment than on external factors. I’m currently working on several projects, and the more advanced ones (but in this business you never know) are a feature film to be made as a French-Spanish coproduction and a very special story, of which I can’t say anything yet.

In your 15 plus years as a feature and documentary film director, have you ever cooperated with a non-profit organisation?

Yes, I have, and in Eyes of the world’s case I had the chance to prove that it’s extremely useful to do so; the positive effect on the people you are helping is immediate.

How and when did you know about Eyes of the world? Have you ever been to any of the countries we cooperate with (Mali, Bolivia, West Sahara, Mozambique)?

I came across Eyes of the world in 2009, in Mali, when we were shooting a film, The Double Steps, in the Dogon Country. Miquel Barceló introduced us to the Foundation. I think their work is extraordinary, it’s almost a miracle. I remember being particularly impressed by a surgeon who operated dozens of people each day. Disabled people were suddenly regaining sight. One of the members of the crew, Nacho Martín, left our shooting to film the work of Eyes of the world’s doctors and he came back deeply impressed.

Were you familiar with the eye health problems in those countries?

No, I wasn’t aware of the huge number of people who suffer from eye health problems in Mali. Economic difficulties, adverse weather and the lack of medical infrastructure there form a kind of “perfect storm”. Cataract is relatively easy to operate here, but in Mali it can cause death. In fact, we knew a lot of people with eye diseases. For this reason, eyes of the world’s task is very important not only because they bring medical assistence where it isn’t available, but they also train local doctors.

How do you assess your implication in the Foundation’s “testimonial” project?

As a learning experience. There are so many things happening next to us that we can’t see until someone shows them to us! Sometimes, you need someone close to you explain their story to fully understand it.