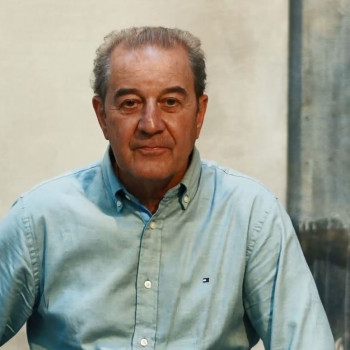 Name: Josep Riera i Aragó
Age: 66
Profession: Sculptor-painter
I was born in: Barcelona
I am in touch with Eyes of the world since: 2019

When and why did your concern for recreating means of air and maritime transport in sculptures and paintings appear?

In fact, this begins at the beginning of the 80s when I was interested, together with the machines in which I already showed some interest, in discovering new territories and, above all, two unknown worlds, such as the bottom of the sea and outer space.

What reaction do you expect the viewer to have to your works?

Expect… I don’t expect anything. I try to perhaps awake some emotion in the person, in the people who see the work, and that some memory would arise, some small memory retained in time… And, when you view the work, this ends up emerging.

What do you want to symbolize with the sculpture that you have donated to Eyes of the world? What message do you intend to give? What inspired you?

In fact the sculpture is based on one of the recurring themes in my work, which appears from time to time, which is the theme of the boat.

The boat has this shape to a certain extent as very sweet, as if it were a smile. Viewed from above it has an elliptical shape, which is like the shape of the eye. And, in this case, I placed an earth globe on top, the representation of a golden earth globe, which would represent an iris, the pupil, and seen from above, we can see an eye.

The shape of the golden globe: gold evokes in me in some way to everything sacred, what is important, and, as it has this effect (it has a gold plating and has a mirror effect) in the end, when you are looking at it, you are seeing yourself. All this refers to travel, your memory, memories, projects…

Your work shows in museums and galleries around the world, but have you ever collaborated with an NGO like Eyes of the world before?

In the 90s and until the early 2000s there were many social entities and many NGOs and organizations that asked artists for some kind of collaboration, either with the donation of a work for auction or a contribution to the art fund. And that was common. Lately this doesn’t happen that often.

I especially remember a collaboration that was important to me, which was with the Red Cross.

Which role do you think art should have in transformation and social justice?

Art has a role in the field of culture. By itself perhaps it does not achieve many things, but in terms of human values, in terms of the fact that man is enriched, in that it makes us all more supportive, more collaborative, in that in some way it opens our eyes to sensitivity… brings values, all this exploration, all this attempt to achieve social justice for all.

In fact, I know about it very tangentially, as I have read about it through press releases that I could read in the newspaper, in magazines, and perhaps, sporadically, a friend who was traveling brought some news of how the situation was in general due to poverty or misery, in some cases in many of these countries. In fact, it has been through contact with Eyes of the world that I have learned much more about this problem and the work they are doing, which I find absolutely impressive.

With what three words would you define the Foundation?