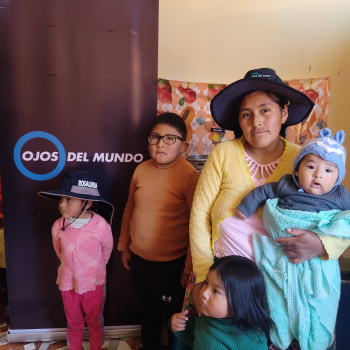 Name: María Cuba
Age: 27
I was born in: Colquiri in the department of La Paz, but I have lived in Oruro since I was two years old.
I am in touch with Eyes of the world since: 2020

For María, her children’s eye health has been a matter of care and concern, but multiple cultural, gender and economic barriers hindered, for years, the access of Edgar, her firstborn, to the eye care he required.

The intervention of his teacher, the involvement of the educational community and the support of Eyes of the world changed the course of Edgar’s life: he was diagnosed and received the treatment he needed to continue his schooling.

This ophthalmological intervention also meant a turning point in María’s life, who is now an empowered woman involved in promoting eye health in the Oruro community, where she lives.

What was Edgar’s situation two years ago, before coming into contact with the Foundation?

His eye was red, he kept touching it and he had the objects close by, but he had to feel them to be able to grab them, he couldn’t play much, because he fell every time. During the pandemic he wasn’t able to do his homework, because he couldn’t see his cell phone, in a nutshell, he was a child who no longer smiled and was sad all the time.

What was it that made you realize the urgent need to seek ophthalmological help?

During the pandemic, his teacher came to my house several times to tell me to take Edgar to the ophthalmologist, because his eyes were bad, but I thought it would heal itself, that it was something momentary, until my partner pointed out to me that he no longer saw the things in front of him and his eye was redder.

What obstacles and circumstances did you have to overcome in order to provide Edgar with the eye care he needed?

I had no knowledge about the care that should be taken with the eyes, I thought that if they turned red or burned, it would go away in a while. A little before the pandemic, I took my son to a doctor at the General Hospital in Oruro and he told me that I had to take him to La Paz to be treated, he scolded and yelled at me that he couldn’t do anything for my son and that I had to take him to La Paz, but I had no money and I thought that it would heal itself in the end. Moreover, when the pandemic came, Edgar’s eyes got even worse, however, my partner didn’t want the doctor to treat him because he is not his son and didn’t have much resources to help him heal.

How did you come into contact with Eyes of the world? In what way did Edgar’s life, your life and the rest of your family’s change when you had the Foundation’s support?

Edgar’s teacher noticed that he was not logging in his virtual classes, so she came several times to our house to look for him and talk to me so that we could take care of my son’s eye. The teacher put me in touch with Ruth, who has since helped me a great deal to get Edgar into care.

The first time we had to travel to La Paz, they took us in the Eyes of the world’s car from Oruro, in the midst of a pandemic with lots of restrictions due to confinement. The Fundation guided me in all the procedures that I had to do so that they could take care of Edgar. For the following trips, people from the community and the parents’ board of Edgar’s school, organized themselves so that Edgar could continue his treatment at the National Institute of Ophthalmology.

My son’s life has changed a lot since contacting with Eyes of the world, because now he’s able to see, he has his own glasses that I couldn’t afford by myself, he can now do his chores and do his homework plain sailing, I can see him smile and play with his siblings. Our life has changed, now I know the importance of having your eyes checked twice a year. Furthermore, I have people who can help me if we organize ourselves, I am not alone, even though my husband has left me, I can do many things for myself and for my children.

What’s your current job? What do you think is the best way to help mothers so that they can provide periodic eye exams to their children?

I stopped working three months ago, because I was hospitalized, now I’m still recovering. I believe that the best way to be able to help other mothers is by informing them of what they should do in case their children need ophthalmologist care and sharing with them everything I did with my son and how he has improved. I have been trained as an eye health promoter, so I usually take the opportunity to talk about eye health at parent meetings at school, at meetings with my friends and family, always telling them how many times they have to go to the ophthalmologist with their families, how they should take care of their eyes and also that they can use SUS insurance.

What things do you think should change in Bolivia (Oruro) to improve people’s access to eye health?

They should build a hospital in Oruro so that the children who need it can be treated, so that they don’t have to travel and can receive good care without being yelled at and treated badly. Make sure that people who do not have resources can also be cared for and educate people on how to take care of others.

With what three words would you define the support you have received from the Eyes of the world Foundation?

Eyes of the world changes your life.