Mariana Delgado, Eyes of the world’s cooperator in Bolivia 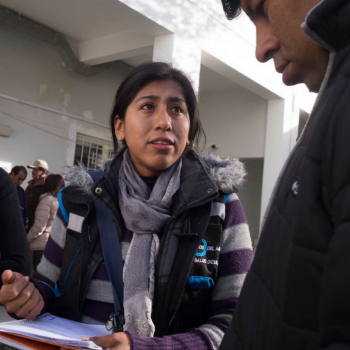 Name: Mariana Delgado Choque
Age: 27
Profession: Psychologist
I was born in: Potosí, Bolivia
I am in touch with Eyes of the world since: 2016

How did you start cooperating in the Eyes of the world Tarija project, and what is it about?

I began my work for the Foundation in April 2016. I’m a psychologist and I coordinate eye health prevention workshops and conferences for children, little girls and teenagers. I also train teachers to do visual acuity tests, so that eye diseases can be detected early on and students can receive assistance in time.

What’s your perception about Eyes of the world’s task in the area? What’s its repercussion there?

Having appropriate information is very important. Eye health is apparently neglected by Tarija’s people. But teachers are becoming more aware of this after many aware-raising lectures on the topic. There are between 5-8 child eye disease cases detected in each grade. Those children should wear glasses, but they don’t.

The lack of ophthalmologists in the public health system is obviously an issue.

In general, what kind of people benefit from this assistance?

We work basically in schools in rural and suburban areas, where less privileged people live.

How do you see the future for our activities in Tarija and Bolivia? How are they received in those communities?

It is important to spread eye health awareness among health authorities and the population in general. The people in Tarija understand what the problem of eye diseases mean. Most educational units hope that the Foundation will be able to detect eye problems in time and provide them with enough glasses.

Scholars’ parents associations support our activities as well. It is very important to reach every corner of Bolivia, especially the most vulnerable sectors of the population: rural areas and children.