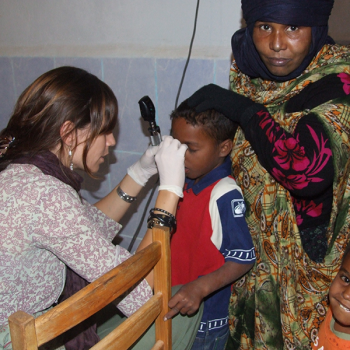 Name: Rebeca Atienza
Age: 39
Profession: Ophthalmologist
I was born in: Madrid
I am in touch with Eyes of the world since: 2007

When and how did you get to know Eyes of the world? Why did you decided to involucrate yourself?

At the end of 2007, I was studying an MBA in subspecialization in cornea and the previous segment in the Institute of Ocular Microsurgery (Instituto de Microcirugía Ocular – IMO) when I had the opportunity of rotating with Dr. Nieto, who had significant expertise in surgery of complex cataract and one of the persons most involved in the foundation Eyes of the world. It was her who encouraged me to join a surgical, medical commission in the Sahara, what for me it became a very gratifying experience, both at the professional and human level.

As ophthalmologists and supervisor of Eyes of the Sahara, which are the main ocular issues of the camps? Which tasks perform the Foundation?

In the Sahara, Eyes of the world has done the systematic screening of the population through the opticians, and it has performed surgical interventions of the patients selected through the commissions that have traveled over the ground periodically.

Likewise, it has done essential tasks of sensitization of the population, trying to prevent the avoidable ocular issues. However, despite this intense work, the main ocular problems continue being cataracts and uncorrected refractive defects. What occurs is that keeps existing a high incidence of this disease between the refugee population, this is probably due to the extreme weather conditions in the desert, the poor consumption of fresh aliments rich in antioxidants (like fruits and vegetables) and the excessive consumption of sugar with the tea.

With the glasses exist several circumstances that make that, despite counting with an optician in each wilaya, the patients do not test their eyes nor getting glasses as they should. In the first place, there are many patients for which traveling for cataract interventions is a high economic effort. If they live far away, these patients don’t go to the control appointments and they don’t test the graduation after the surgery. In the second place, because of the sand of the desert and despite the effort to maintain them, the equipment deteriorate very frequently, as the glasses lenses get scratched very easily. Moreover, in this circumstances is difficult to keep the motivation of the technics.

In your opinion, which are the future challenges facing the project? And the organization?

The project Eyes of the Sahara has a crucial goal which is to achieve that the Service of Ophthalmology of the Health Ministry of the SADR (Sahrawi Arab Democratic Republic) becomes more autonomic and has more initiative. At this moment, it depends exclusively on the international commissions, since it doesn’t exist a specialist on the ground.

The challenge consists in involving a person, either ophthalmologist or Saharawi doctor, that could, from there, act as engine and be responsible of the Ophthalmologist Service. This professional would have to exercise some leadership over the technical staff. And, on the other hand, to follow the commissions’ work correctly. Moreover, with the Foundation’s logistic support, this professional should be able to manage this resources to guarantee ophthalmologic assistance to the Saharawi population. The organization should maintain the humanity help, from which the camps are entirely dependent until there is a local ophthalmologist available or the conflict gets resolved, which it’s been going on for 40 years already.

One year we went to the hospital of wounded of war in Haila to check the interned patients. The truth is that to start, nobody was in the mood to go, just for not knowing what we were going to find. We finally went to the coordinator of the project (whom by that time was Bibi) and myself. The experience, far from depressing, it was most enriching: the patients were perfectly neat and accompanied by their families, they turned out to be very talkative, and many of them told us war anecdotes.

Although we just had a portable lamp and a tonometer for the revisions, we were able to see all interns. There it was the only time I tried camel milk, a delicious drink reserved for the ill.

What has been the most emotional moment in which you honestly felt that your work was worth it?

A few years ago I did surgery in the cataract of the only eye of a Saharawi person. He lost the other eye in the war. The intervention was very successful, and he was really grateful, so he insisted in inviting us to his Haima for lunch.

The Saharawi had seven daughters, all girls. And the youngest, who was no older than four years, was so happy that she kept dancing all the time. Being there and sharing happiness with the family was really nice.

Can you define in one phrase what benefits gives you collaborating with Eyes of the world?

It definitely reconciles me with the ophthalmology