For a global and equitable access to COVID-19 vaccine 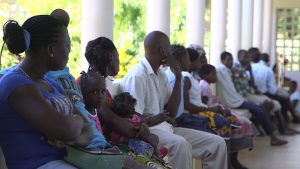 “Nobody will be safe until everyone is safe ” is the most repeated phrase among health officials worldwide since the COVID-19 pandemic broke out and is currently being rewritten by epidemiologists as “there will be no security for everyone as long as vaccination is not a fact in all countries”.  The health crisis can only be controlled once vaccines are available to people in all countries of the world.

While the vaccination schedule in countries in our environment is already in process, most of the African countries haven’t received any doses, highlighting the inequalities between countries, communities and people around the world.

In Mali, where the Eyes of the world Foundation has been implementing a comprehensive eye health project since 2008, the health authorities estimate that just over 4 million people (20% of the population) will be vaccinated and expect the first batch of vaccines (800,000 doses) to arrive in April through COVAX. COVAX is an initiative promoted by the World Health Organisation (WHO) and the Vaccine Alliance (Gavi) that aims to guarantee equal access to vaccines against COVID-19.

The situation in Mali is similar to that expected in another of the territories where Eyes of the world is fighting preventable blindness, Mozambique, where the government intends to vaccinate around 6 million people (out of the country’s nearly 30 million inhabitants) from July onwards, as the vaccines are not expected to arrive until June. As an alternative to COVAX, the Mozambican authorities have also purchased 500,000 doses from India.

The cost of vaccines is the main cause of the delay in immunisation on the African continent and the major obstacle to ensuring access to vaccines for all people in the world, regardless of their financial capabilities. COVAX, which aimed to deliver 2 billion doses by 2021, only has contracts for half of these.

But the fact that the African continent (the second largest in terms of population) is the last in terms of vaccination campaigns is also a consequence of other factors such as logistical difficulties in distributing vaccines that require refrigeration, the population’s distrust of the efficacy or possible adverse effects of vaccines and, very significantly, the hoarding of doses by various Western countries, which have signed additional agreements with the laboratories that manufacture the vaccines, and which have stocks that exceed even the number of their own populations.

For this reason, at the Eyes of the world Foundation, in line with the postulates of the WHO, claim a global and equitable access to vaccines against COVID-19 because immunity on a global scale will only be reached if no one is left behind.

Likewise, from our experience as a development cooperation entity in the field of health, we have supported and continue to support the health authorities in the fight against COVID-19 in the territories where we have projects underway and, in particular, we strengthen health systems and local community networks to tackle the pandemic.