The hegemonic concept of masculinity: barriers for equal eye care in Bolivia

The concept of gender in Bolivia has been linked to the figure of the women since its inception. The actions undertaken by local administrations in regards to this subject have helped clarify the social, economic and political situation of women, and subsequently reduce some of the most obvious inequalities.

However, it must be said that there has been no reflection surrounding the situation of the men that have tried to consider their position in a society known as patriarchal and sexist, which imposes dominant responsibilities on women. 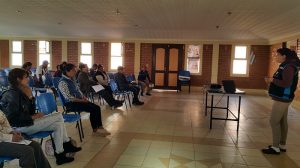 El Diagnostic about gender relations in the Department of Tarija developed by a local consulting team consisting of Emilia Copa, Sofía Juanes and Lorenzo Calcina, and commanded by Eyes of the world, is a document that aims to identify the barriers that negatively affect women in ophthalmological services, which is in many cases linked with the hegemonic concept of masculinity.

Through interviews in different focus groups conducted in the Tarija Department, the view that men have regarding the role they are called to fulfill in their society has become known. Their opinions respond to particular sociocultural factors that, for example, push them to follow family roles that, in terms of health, establish an order deciding who goes first to the doctor when someone is ill. This order places children first, the husband second, “because he is the one that generates income,” and finally, the mother because “she puts up with more.”

The advisory team that has developed the gender diagnostic has outlined a series of recommendations to confront the barriers from new masculinities, a concept that advocates for commitment, reflection and practice in order to achieve personal change in men towards equal positions, aimed at achieving a fair social model for all. The recommendations that stand out the most are: working with the Education Units to carry out advocacy and training activities with parents; developing work strategies to reach out to men through neighborhood and community organizations; developing positive discrimination in favor of spouses, both men and women, so that they enjoy the right to health on equal terms; highlighting and valuing the work and leadership of women leaders in neighborhoods as advocates of health.

On the other hand, the study has detected other barriers that limit and hinder women’s access to vision care. There are cultural factors, such as the habit of not examining health, which is linked to economic factors -since the residents spend their time working in mainly precarious jobs. Therefore, they do not go to the doctor until the pain is unbearable. Another barrier is minimal access to information, which leads to the population not knowing about various eye pathologies or where to turn to when they have eye problems. Finally, there is the geographic factor, which refers to the remoteness of health centers to households and acts as a barrier because of the cost of transportation and the extensive travel time.