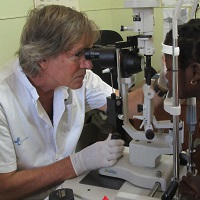 Carlos Moser has a special relationship with Mozambique, a country which sparked his interest in ophthalmology. He went in 1984, when he was working as an internist in the Quelimane Hospital and saw how ophthalmology helped return vision to patients and how that gave the service an atmosphere of true joy in comparison with the reality that he was living, with people affected by the civil war and malnutrition.

From that moment, he decided to pursue this specialty to “give quality of life to the people.” Moser’s connection with Mozambique has continued, considering that he was the medical supervisor of the Foundation’s programme until 2005 and has traveled almost annually to the African country. His last trip was in September of 2011, when he was in charge of a medical commission in Inhambane.

What is your assessment of the commission in Inhambane?

The truth is that it was a pleasant surprise, as I found many improvements, in terms of the goals to be met as well as the organization of projects on the ground.

How has ophthalmological attention evolved since the first time you went?

It is undoubtedly better than before, since ophthalmological attention practically did not exist before and since then, many patients have been cared for. So far, there has not been much progress with the objectives set by the Vision 2020: The Right to See programme, but good foundations are currently being laid for them to begin to be met. Lately, local ophthalmologist Abel dos Santos has joined the service, which has been set up by Eyes of the world.

What does this mean for the residents of the province?

The arrival of Dr. Abel dos Santos is fundamental, since we are talking about an ophthalmological development programme. The presence of the ophthalmic technicians Miguel and Sergio is also very important; without them it would have been totally impossible to start anything. I think that more technicians are still needed in the province to be able to establish a good healthcare network, guided and supervised by Dr. Dos Santos.

What role do the staff from Mozambique generally play?

As I was saying earlier, I am of the opinion that any development programme should be run by staff from the country and Eyes of Mozambique is not an exception. External aid should only be used at the level of training, assistance with equipment (ophthalmologic and that of infrastructures) and consultancy.

Does Mozambique and its people have any distinctive features compared to other countries that you know?

I like the friendliness and joy that both the team members and patients give off. The only other African country that I have worked in, apart from Mozambique, is Ethiopia, and the truth is that the people there are very different.

What does this voluntary collaboration with Eyes of the world bring to you?

I like being able to help even though I am absolutely aware that so far the only thing I have done is get a certain number of patients to win the lottery and see again; I don’t really think I have made any contributions in terms of the country’s development. On a personal level it brings me a lot, and even though I travel away from work on many occasions, I like traveling with work more because you get to know the reality of a country more than you do traveling as a tourist.