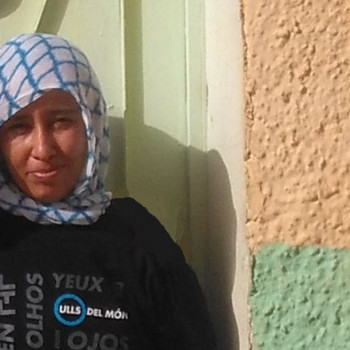 Name: Embarcalina (Bakina) Saluh
Age: 34 years old
Profession: Translator
I was born in: I was born at the Tinduf refugee camps in Algeria
I am in touch with Eyes of the world since: 2017

Embarcalina Saluh (Bakina) is the joint coordinator for Eyes of the world Foundation in the Sahrawi refugee camps. This type of role was almost unthinkable for a woman in the Sahara due to the social and cultural prejudices. In this interview, she talks about her experience as a working woman in an environment where there is still so much to improve regarding gender equality politics.

I was born in the camps but I was able to study abroad, first in Algeria where I obtained my degree in English Studies from Oum Buaghui University and then I moved to Seville (Spain) where I did a master course in English/French translation. I now live with my parents in the camps.

How did you get in touch with Eyes of the world? What do you do?

I contacted Eyes of the world  back in 2016 through Maria Tavera who was the coordinator for the Eyes of the Sahara Project. I work as a joint coordinator to the programme in the Sahrawi refugee camps.

Is it common for a woman to have a position like yours in the area? Do you think it is a challenge for a woman?

It’s not common for a woman to work for an NGO, although this is now changing and there are more women on senior roles within the Sahrawi Institutions and working for the nonprofit organizations here in the camps.

What are the main difficulties you face to do your work in the area?

Sahrawi society is an Arab Islamic society and as such, women’s role is mainly to stay home and be involved in domestic and family matters exclusively. Their situation is a bit more flexible in the camps due to the historic circumstances of the Sahrawi people since the war and their refugee status.

However, women working outside their homes is a daily challenge, a continuous struggle against those who decide what is good and what is bad in the society.

The struggle begins with the family: being a girl or a woman forces you to do all the domestic work as a priority above any other job outside the house, something men are not forced to do.

In external working environments, women find themselves inferior to men, they make you feel there are many things that you cannot do as a woman and that they are reserved only for men.

How would you define women situation in the Sahara camps? Is there any gender equality agenda?

Compared to other Arab and Muslim areas, the situation for women living in the Sahrawi refugee camps is far better. However, there is so much to do.

Roadblocks that prevent Sahrawi women to feel equal to men are not related to any legislation, but society is very conservative with anything to do with women’s rights and gender equality, it is only recently that significant initiatives have been put in place.

Gender as a term is something completely new and just recently introduced in society so the concept of gender equality is in a very early stage and there is a long way to go.

What do you think are the main problems that prevent women to get access to a proper eye care and what solutions would you suggest?

Sahrawi women have a more difficult access to a quality eye care than men, due to their day to day circumstances in the camps.

Many women do not come to the ophthalmologic clinic because of family reasons; their domestic and family tasks are that many that they cannot make time to leave the house during visiting hours.

They are also unaware of what services are provided by the clinic as they cannot leave their homes.

Sometimes, the distance between the house and the hospital is another reason why women do not come to the clinic, as there is no regular transport from their homes to the regional hospital within each camp.

Some of the initiatives that could be explored would be: provide some type of support from the authorities to facilitate women access to eye care facilities (find someone to look after their families while they visit the doctor), get consultation rooms closer to families, program an ophthalmological consultation at the dairas… We have to keep in mind most of the inhabitants in the camps are women and children; give women priority in the consultations could lead them to pay more attention to their eye health. Lastly, promote awareness campaigns about the importance to come to the ophthalmological service delivered within the camps.

Most of these initiatives are being implemented or are about to be in the coming years thanks to the impulse of the Foundation.

Are more women coming to the clinic?

According to the latest statistics, we can see the number of women coming to the eye care centers is improving every day, something we are looking forward to increase in the near future.

How do think ophtalmological care can be improved in the Sahara?

A year ago, we did not have any ophthalmologist in none of the camps. First attention was done through special ophthalmological commissions that travelled across the area from time to time to conduct initial consultations provided by a team trained by Eyes of the world on how to treat the most urgent cases.

Nowadays we can see an improvement thanks to the on-site ophthalmologist, and refugee patients are very confident with the attention they are getting from the services offered by the Department of Ophthalmology of the SADR.

And finally, with what three words would you define the Eyes of the world Foundation?

This website uses cookies to improve your experience while you navigate through the website. Out of these, the cookies that are categorized as necessary are stored on your browser as they are essential for the working of basic functionalities of the website. We also use third-party cookies that help us analyze and understand how you use this website. These cookies will be stored in your browser only with your consent. You also have the option to opt-out of these cookies. But opting out of some of these cookies may affect your browsing experience.
Necessary Always Enabled

Any cookies that may not be particularly necessary for the website to function and is used specifically to collect user personal data via analytics, ads, other embedded contents are termed as non-necessary cookies. It is mandatory to procure user consent prior to running these cookies on your website.