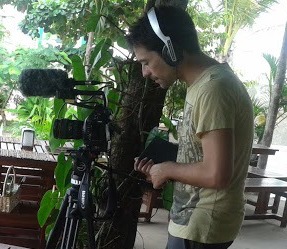 Name: Marc Vilarnau
Age: 34
Profession: Audiovisual producer
I was born in: Barcelona
I am in touch with Eyes of the world since: January 2014

Marc Vilarnau traveled in 2014 to Inhambane to document the work of Eyes of the world on the ground. His work was translated into the documentary Miradas, a 25-minute audiovisual that premiered on December 2 in the Cultural Section Room of El Corte Inglés of Portal de l’Àngel in Barcelona. Miradas is currently moving through the circuits of national festivals and will soon be seen in different cultural spaces.

How did come up the idea of making the documentary Miradas?

I wanted to do a volunteer project related to my profession. In addition, my wife got involved in a three-month project at the Manica Hospital in Mozambique. I didn’t want to miss the opportunity of getting to know the country and cooperate, so we looked for Catalan organizations that were working in Mozambique. My idea was to make a documentary because I am a producer. I contacted Eyes of the world, and thanks to them I discovered the avoidable blindness, which was unknown to me. I realized that it had to become known, and it was worth to make a documentary about it.

It consists in collaborating in doing a more just society with fewer inequalities through audiovisual means. It is a very healthy activity, and it brings a lot of professional experience.

Which problems did you encounter when it came to the shooting?

What impressed you the most about Mozambique?

In carnival, they did a dance competition in Inhambane. All schools participated, everybody was on the street. On Sunday morning the winners were announced. I had never seen so much happiness, such expressivity in anyone as in the groups that won. They ran up and down through the village, celebrating and dancing. It was a show of vitality.

What case of avoidable blindness impressed you the most in Inhambane, Mozambique?

The case of Father Mateus, who went blind while working as a painter in South Africa, and who openly acknowledged that, if he had gone to the hospital earlier, he might have been able to keep his sight. Since then, he has been communicating to the people the need to see a doctor if they have a vision problem.

In which projects are you currently working?

Currently, I am not collaborating on any project of social responsibility. But I am very proud of one that I did last year, together with the Vicki Bernadet Foundation and the Higher School of Design-IED, of which I was a professor. My students did the package of graphics in movement of the Second Gala of Fada Awards, that promotes the sensibilization and prevention of child sexual abuse.