María Sanchidrián, ophthalmologist in the last field commission in Sahara 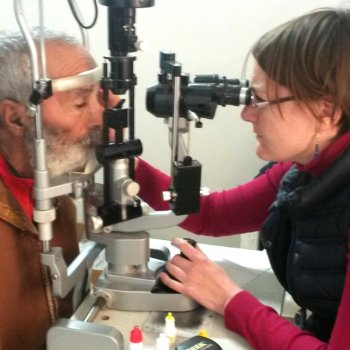 Name: María Sanchidrián
Age: 37
Profession: Ophthalmologist
I was born in: Ávila
I am in touch with Eyes of the world since: 2015

María has spent six months in refugee camps in Sahara. We’d like to learn more about her professional and personal experience there.

It’s not the first time you work in a field commission. How long have you been cooperating with the Foundation? How did you start working with them?

My cooperation began in Guinea Bissau in 2010, volunteering for some international eye health projects. I began working with Eyes of the world in 2015.

Why did you choose to work in Saharan refugee camps?

I learnt about the conflict years ago, and I was in touch with the Association in Support of The Saharan People in Zamora and they encouraged me to stay with the Saharan Refugee Camps for the first time.

What’s been your main task in the camps? What other unexpected work have you done there?

Health professionals have received training in ophthalmology thanks to the implementation of our project. Specifically, knowledge transfer, the handling of equipment and decision making have been improved. We contributed also to the reinforcement of the Eye Health Department.

Being a doctor in an underdeveloped area means working not only as an ophthalmologist. I also help everyone who needs any type of medical assistance.

What is the main problem you have found when doing your assistance and educational work? Have the main goals been achieved?

In general, the team and the people have cooperated in a satisfactory way to make the project run properly. Language may have been the main obstacle. A dialect of Arabic is spoken in the camps and sometimes that stops us from communicating and providing information fluently.

In spite of that, objectives have been satisfactorily achieved. Not only have we brought assistance to a population larger than expected, but we have also improved the local ophthalmology training, so the local human resources will be able to work autonomously from now on.

Once your mission has been accomplished, will the professionals be able to attend to patients in refugee camps autonomously? What difficulties may they come across?

The main problem they will have to face is the complexity of eye diseases in the camps, and the lack of means to treat them.

In terms of eye health, how would you describe the situation there?

The Sahara may easily be one of the Earth’s worst places for eye health. There are many coexisting factors for that: one is the incidence of solar light in one of the biggest deserts in the world. Another reason is the lack of a permanent eye healthcare system, despite the visits to the camps of some travelling health commissions. Other reasons are: lack of sanitary education, lack of a developed health system and, finally, the advent of new illnesses like diabetes.

Eyes of the world’s doctors don’t usually remain that long doing field work. Do you think six months is enough to carry out your task?

In my opinion, the project should last longer, because it takes several years for the health professionals to gain enough experience.

What was the experience like, from a personal point of view? Would you do it again?

It’s been one of the best projects I cooperated with. It has given me the chance to focus on some work fields such as health personnel training, chronical pathologies and institutional strengthening. At the same time, it has allowed me to be part of the local population and to better understand their culture and the region they live in. I’m still interested to keep collaborating with this project in the next years. It is during long stays that one can contribute to a better eye health care in the long term.

Could you define in three words what the Foundation means to you?

What has influenced you the most in this experience?

The way the locals trust our project to the point where were become an eye health reference in that area.