Núria Ramon, former general manager of Eyes of the world 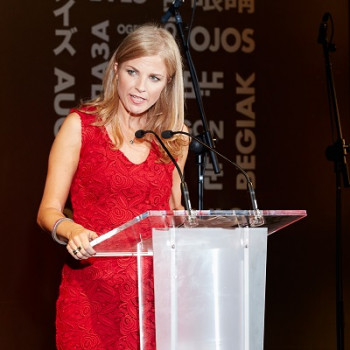 Name: Núria Ramon
Age: 54
Profession: General manager of Eyes of the world until 2021 and responsible for Strategic Partnerships from October 2021
I was born in: Barcelona
I am in touch with Eyes of the world since: 2001

Núria Ramon graduated in Law from the University of Barcelona in 1990. She began her involvement with Eyes of the world in 2001 when she began her career as a member of the Board. In 2003, she became the general manager of the Foundation until October 2021. With her in charge, the Foundation has consolidated the ophthalmological cooperation activities included in the Sahara and Mozambique projects, and has opened up new opportunities for improving eye health in different departments of Bolivia and the Mopti region, Mali.

Her work at Eyes of the world has not ceased but since 2021 she has been responsible for the Foundation’s Strategic Partnerships.

How did you become the director of Eyes of the world?

In 2001, Rafael Ribó, sensitized to eye health, as a result of a retinal detachment he suffered, and aware of the possibility of contributing to improving the lives of people suffering from eye diseases and not having resources to be treated, he decided, together with Dr. Borja Corcóstegui, to found Eyes of the world.

Rafael told me about his desire to create the foundation and asked me for support in drafting the bylaws. At that time I was working in the Department of Justice of the Catalan Government. At first, he offered me to be secretary of the Board of Trustees and two years later, he and Dr. Corcóstegui offered me the General Management.

Probably, the excitement that moved me helped me to overcome the respect that made me lead such a specialized organization and get deep into a new sector in which I had little experience.

What appealed to you about being part of a foundation that fights preventable blindness?

What attracted me and continues to appeal to me is the impact and transformative power of this cause. Fighting preventable blindness is synonymous with transforming lives, the lives of those people who live in the darkness of blindness as a result of poverty and who, thanks to the Eyes of the world projects, recover their sight and, therefore, the possibility of studying, working, being autonomous people…

You have been a director for 18 years, what has this stage of your life been like?

It has certainly been the most enriching and happy stage of my professional life. I have had the opportunity to learn about realities and cultures that are very different from ours, from which I have learned a great deal.

I was also able to experience magical, unique moments when I saw the faces lit up by a grateful smile from those people who have regained their sight after cataract surgery.

But probably seeing how local professionals trained by Eyes of the world, ophthalmologists, instrumentalists, opticians, equipment technicians… are working in the public health system improving the eye health of the population of their countries, is still the most rewarding experience I have ever had. Capacity building has been and is a priority for Eyes of the world.

What do you think are the biggest difficulties you have had to deal with as a director?

Without going into the crisis that COVID-19 has caused worldwide, or the difficulties involved in managing the day to day of any organization, I would highlight those arising from the very contexts in which we cooperate (war conflicts, diseases, such as malaria, which our teams have suffered, affected by meteorological phenomena…).

On the other hand, the need to find the necessary resources to be able to implement the projects and ensure the viability of the Foundation has been one of the concerns that has accompanied me during my 18 years as director.

As a director of the Foundation during these years, what do you think of women’s leadership in non-profit organizations?

The female presence in the technical teams of non-profit organizations is clearly the majority and, according to some studies, more than 40% are led by women.

While it is true that the gender gap in NGOs is smaller than in the business world, there is still a lot of work to be done and there is certainly a need for more women in the management of these organizations.

I am proud to say that, in the field of ophthalmological cooperation, Eyes of the world has been at the forefront of developing a gender policy that covers all areas of action.

How do you face this new challenge of being the Strategic Partnerships Officer? What motivates you to do so?

This is for me a new stage that I face with great enthusiasm, the illusion of continuing to contribute to making effective the Universal Right to Vision, focusing especially on finding those alliances that allow us to grow and be able to bring eye health to all those people who unfortunately do not have access to it. A challenge that motivates me immensely!