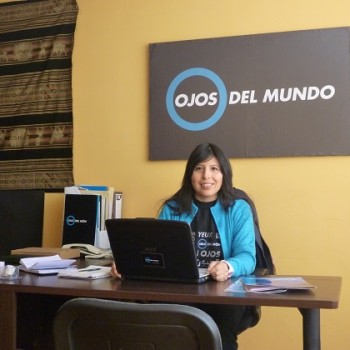 Name: Patricia Tárraga Quintela
Age: 35
Profession: Eyes of Bolivia program coordinator
I was born in: La Paz
I am in touch with Eyes of the world since: 2010

Patricia Tárraga is the coordinator of the cooperation project that the Foundation carries out in El Alto and its area of influence. She is the head of the local team.

With a degree in Financial Audit and Business Administration, Patricia began her professional career as an external consultant for different private companies. In 2001, she started cooperating with non-profit organizations, initially working with street children and later as financial coordinator of Doctors Without Borders. In 2010 she takes another step and begins to work to improve ocular health of the people in her country.

How did you become interested in cooperating with Eyes of the world?

During my university years I volunteered with some social organizations and realized people’s needs in the country, mainly in health and education, and that there are organizations interested in collaborating in these areas. It also helped me understand that it is important to have suficient professional staff and resources to achieve the goal for the common good. Action, commitment and participation of public and private actors play the essential part in it.

How would you describe the program that Eyes of the world is developing in Bolivia?

It is a program that aims to improve access to eye health for the population of El Alto municipality and its rural area of influence. The program is planned to be completed in 2013 and it will benefit 200,000 people, including ophthalmological network office assistants, eye surgery beneficiaries, ocular health talks assistants and will allow people to access ophthalmological care in rural areas.

What are the strong points of the program?

It is a comprehensive program, which includes ophthalmological care, training at the first level of care in the timely diagnosis of eye diseases and prevention action in the community. The existence of the ophthalmological network that is unique in Bolivia, is an example that ocular health can be of quality and accessible to the most disadvantaged population. Another important point is human resources, the work team that the program relies on, many of them with years of experience and extensive knowledge of the subject.

Where do you think the project should evolve?

The ophthalmological network of El Alto is a good example that  should be replicated in other areas of Bolivia, or even in the city of La Paz itself. Prevention action which involves promotion activities should aim to be fulfilled not only at the departmental level, but also at the national level. And, finally, the ocular health manual, already approved by the public counterpart, should be available in other departments of Bolivia.

Is the Bolivian government ready to accept the development of these activities?

The Bolivian authorities have been slowly accepting the course of activities and right now it is a good time. A clear example is that 70% of human resources of the network are already managed by the public counterpart. Another example is the entry into the rural area where an eye health action plan is being designed by the Ministry of Health, represented by SEDES La Paz, in collaboration with Eyes of the world. Its future mission is to reproduce it in other departments of Bolivia.

What does the population of El Alto think about the association?

The population of El Alto appraises it and appreciates the intervention of Eyes of the world. However, the population is still a little unfamiliar of the ophthalmological network and actions to prevent eye problems, and some educational work should be carried out by the community. There is still a long way to go and I am certain that we can reach it with the work team that the Foundation currently has in Bolivia.