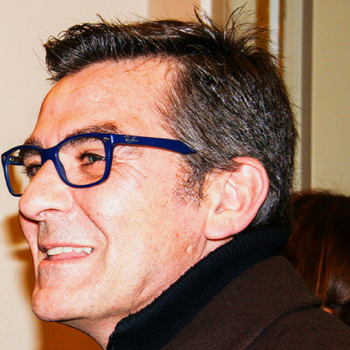 Name: Queco Novell
Age: 54
Profession: Journalist, actor and comedian
I was born in: Barcelona
I am in touch with Eyes of the world since: 2017

Queco Novell is a Catalan journalist, actor and comedian. He was born in Barcelona in 1963. After completing his journalism studies in the Autonomous University of Barcelona, he was a news anchor in TVE’s Catalan afternoon news broadcast. Later, he worked in Minoria absoluta, RAC 1’s political parody radio program.

He’s currently playing different political personalities in TV3’s program Polònia. Besides his humorous bent, Queco has taken part in several benefits. Because of that, Eyes of the world proposed him as a show host in our benefit dinner, The Night of the Eyes of the world, he accepted without hesitation.

How did you come across our Foundation? What’s your opinion on having co-hosted Eyes of the world’s gala dinner (our most important yearly event) with Lídia Heredia?

Many years ago, Rafael Ribó told me about Eyes of the world and, back then, it already sounded like a great, praiseworthy initiative. So, when Rafael asked me to host your annual gala dinner, I didn’t found any reason to refuse. And Lídia is great to work with!

What influence can celebrities like you have by getting involved with this kind of events, which celebrate and divulge social solidarity and volunteer work?

Unfortunately, organizations as yours often need a famous face to attract widespread attention. And I say “unfortunately” because their objective alone should make our collaboration unnecessary. However, if my contribution helps to extend your influence, that’s fine with me.

Have you ever been to any of the countries we collaborate with (such as Mali, Bolivia, Sahara, Mozambique…)? Did you know their struggles regarding eye health problems?

Well, I have never been to any of those countries, and if it wasn’t for your work I would have never been aware of those problems. Back to the main issue: entities like yours help to raise awareness about problems which otherwise we wouldn’t be aware of, they help us leave the comfort zone.

Our gala night is an event full of emotions. Which one do you remember most fondly?

Rafael Ribó’s speech had a profound impact on me. He, as usual, was right on target and didn’t leave anybody indifferent.

Would you advise others to get involved in this cause and to participate in Eyes of the world’s periodical activities?

Absolutely. To say otherwise would be total nonsense.

Last but not least, and mentioning your ability to make people laugh, do you think humor has its place in solidarity work? Is it a way to deal optimistically, even joyfully, with troubles?

First of all, I think humor has its place in almost every aspect of life. We at Polònia have often made humor about humorless situations, especially this “hot autumn” we Catalans have gone through. Obviously, solidarity work can be fun too. Life is hard enough when you need humanitarian aid not to be able to laugh sometimes.

This website uses cookies to improve your experience while you navigate through the website. Out of these, the cookies that are categorized as necessary are stored on your browser as they are essential for the working of basic functionalities of the website. We also use third-party cookies that help us analyze and understand how you use this website. These cookies will be stored in your browser only with your consent. You also have the option to opt-out of these cookies. But opting out of some of these cookies may affect your browsing experience.
Necessary Always Enabled

Any cookies that may not be particularly necessary for the website to function and is used specifically to collect user personal data via analytics, ads, other embedded contents are termed as non-necessary cookies. It is mandatory to procure user consent prior to running these cookies on your website.