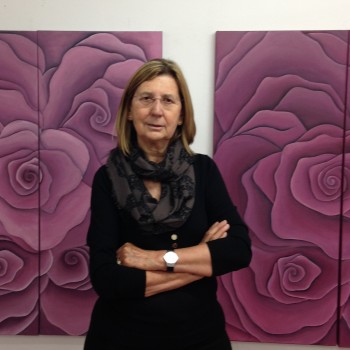 Name: Rosa Tardiu
Age: 71
Profession: Painter
I was born in: Barcelona
I am in touch with Eyes of the world since: 2013

The artist Rosa Tardiu, very sensitive to people with visual impairments, made a donation of two of her works to the Eyes of the world art collection in 2013. Since then, she has been involved with the entity.

Rosa Tardiu was artistically trained at the Massana School in Barcelona and improved her knowledge with the painter Luis García Oliver. After being the artistic director of the graphic editorial CIRO in Barcelona, she made her first exhibition in 1979 at the Madei Gallery in Barcelona. Since then she has presented several art exhibitions in the United States, Germany, France, Italy, China, and Spain. She has permanent work at the Montserrat Gallery in New York.

Why did you decide to collaborate with the Eyes of the world Foundation?

Because I think the Foundation is developing an essential task, avoiding blindness in developing countries as much as possible.

What would you say to other artists to encourage them to collaborate with the Foundation?

I would like to point them out the close relationship that exists between their (visual) art and the objective of the Foundation, which is to return light and color to so many eyes in the world.

During May and June, you had an exhibition of your work at Espacio120 in L’Hospitalet de Llobregat. How does it work in favor of Eyes of the world?

Spreading information about the Foundation and offering a percentage of the sales.

The first work we find in the exhibition has a direct relationship with the vision. What can you say about it?

It’s my self-portrait, painted in 1990. It shows the importance that I give to the look, and the eye, since I’ve had severe vision problems from childhood.

How did you start in the artistic world?

I grew up in a family dedicated to the graphic arts, and since I was a child I learned to appreciate the beauty of art.

How would you define your style?

It is personal and not easy to classify. US critics rate it between conceptual and representative.

What motivates you when creating a painting?

The emotion produced by the world that surrounds me, not only its forms and colors but also the feelings of human beings.