Refractive errors are very common eye disorders that are caused by the loss of the eye's ability to clearly focus images on the retina. According to the WHO, there are 153 million people with visual impairment in the world caused by uncorrected refractive errors (lack of glasses with correct lenses).

Blurred vision as a result of these errors appears when the cornea and lens, which act as lenses, stop making light rays hit the retina, the innermost photoreceptor layer of the eyeball.

The three main refractive errors are myopia, farsightedness and astigmatism. Myopia prevents seeing clearly the distant objects; farsightedness, on the other hand, makes it difficult to see the close ones, while astigmatism is the distorted vision caused by the abnormal curvature of the cornea.

These three errors are given by differences in the length of the eyeball (myopia and farsightedness) or in the curvature of the cornea (astigmatism). Presbyopia or eye strain, the fourth disorder, on the other hand, occurs when, due to age, the lens loses the ability to focus on nearby objects.

Blurred vision, eye “heaviness” and headache due to continued overexertion are the main symptoms of these eye disorders, which disappear using corrective glasses, contact lenses or refractive surgery, very accessible solutions in the first world, but not so much in developing countries.

Get to know Virgilio’s story 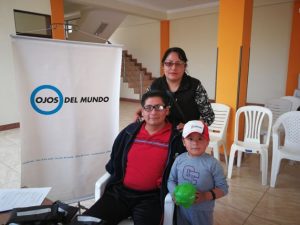 Virgilio was born in Oruro (Bolivia), where he lives. Five years ago he had an accident handling high-voltage cables that caused third-degree burns and the amputation of both arms. He fell into a depression and has been able to slowly get over his situation thanks to the support of his family who has never left him alone.

Through the Association of Persons with Disabilities, he learned that ophthalmologic care was being carried out, so with his wife and young son they went to the consultation.

He had blurred near and far vision and he was not able to see properly anymore. We provided him with two pairs of prescription glasses that will help him adjust his vision to both distances. His wife helps him fondly to try the glasses and he is filled with joy to find out he can see better, he walks and does not feel any discomfort; he tries the other pair and turns even happier and tells his wife he will be able to read again. His wife tells him he is even more handsome wearing glasses.

He thanks the Eyes of the world Foundation for supporting people with disabilities and poor resources and asks us to continue this kind of help because there are many more people who need it.