Interview to Irene Vilà, volunteer optometrist in Eyes of the world 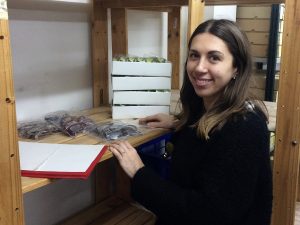 Irene Vilà Porsell is a Catalan optometrist with a degree in Optics and Optometry of the Polytechnic University of Catalonia. During her postgraduate studies of Clinical Optometry at the Institute of Ocular Microsurgery (IMO), she took part in the IMO Foundation’s Eye Health Program doing medical examination in some schools in disadvantaged areas of Catalonia in order to fix children’s eye health problems.

Carol Camino, Irene’s colleague and long-term volunteer in Eyes of the world was the one who brought Irene into collaboration with the Foundation.

Currently she works in the Ophthalmology Department of Hospital Clinic of Barcelona (ICOF) and collaborates on different projects. Irene also comes to the Eyes of the world office to help sort out multiple frames and lenses donations received over the course of last years.

She defines herself as a happy and optimistic person who likes new challenges and adventures, as well as being willing to help those in need.

What motivated you to collaborate with the foundation? 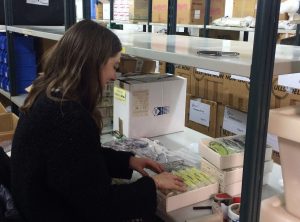 To be honest, for some time I felt the need to lend a helping hand in something related to my profession. My first intention was to be a freelance volunteer to support those who might need it, but Carol Camino told me that Eyes of the world was looking for volunteers to collaborate from their headquarters in Barcelona. And I immediatey decided to sign up.

How does volunteering contribute to your professional and personal life?

For me it is really satisfying to know that I am doing my small part in helping those who really need it.

Do you think the Foundation’s work is important? Why?

Indeed, I think the work they do is very important, since it allows many people to get all the necessary help and resources to improve their vision, and even avoid reversible blindness by addressing the cause which would be impossible without such assistance.

What exactly is your job in the foundation?

During the first months I was selecting, classifying and ordering all the ophthalmic lenses that the Foundation had in the warehouse to make an inventory stock and then send them to the different destinations that collaborate with Eyes of the world. After finishing this task a few months ago I started classifying and a counting different types of frames. The purpose is that all this can be useful for those who need it the most.

Which three words define the Eyes of the world Foundation the best?

As a woman and optometrist, have you ever felt limited during your professional or training work?

To be honest I have been lucky to not be limited due to my gender. However, due to the fact that optometrists are mostly women, I have sometimes heard (even from other women) that there are too many females in this field and that it is dangerous. Or for example, they were looking for a man for this position regardless of their professionalism or experience, but because it’s very difficult to find one, they ended up hiring a woman, as if that was something inferior or negative. Such things happening in the 21st century make me sad.

In your opinion, what factors impede women to fully exersice their rights, both individually and collectively?

I think that, unfortunately, we are still living in male chauvinist world, but I like to think that this trend is slowly changing. Personally, I am lucky to be surrounded by men who support the idea of feminism. However, if I look a little further, I realize that unfortunately it is not so common. That exactly is the reason why women are not able to fully exercise their rights.

Have you heard about the “new masculinities”? What’s your opinion about it?

If I am not mistaken, it is a movement of men who seek equality between men and women in all aspects. I think it is very positive that men start to realize that they should be a part of the feminist movement since men and women need to work together to teach our children the value of equality. If we want to stop living in masculine dominant world we should also say no to any gender clichés or prejudices and end gender violence that causes such a big damage.

In countries with poor economy women’s right to sight is especially violated. In your opinion, what measures any cooperation project should take in to guarantee equal access to eye health?

This is a complicated question, because for me it is still difficult to understand that a fundamental right is violated for someone just for being a woman. I think a good example is the one that is currently used in diferent projects of Eyes of the world: teaching women to integrate themselves into the health system, thus making themselves visible. As a result, more women start to come to the ophthalmological assistance centers to get medical help.

How do you see the future as a woman?

I see the future with optimism, but to be fair there is still a long and difficult way to go. I would like my daughters and/or granddaughters to live without having to experience the fear that we can sometimes feel now in some situations or without suffering pay or social discrimination just for being a woman.