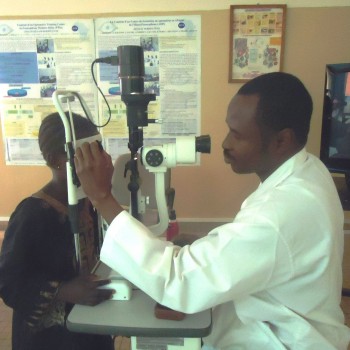 Name: Adama Issaka Guindo
Age: 46
Profession: Ophthalmologist
I was born in: Mali
I am in touch with Eyes of the world since: 2007

How and when did you come to know the Eyes of the world Foundation?

It is through a Spanish tourist agronomist that I heard about Eyes of the world, and he is the one who gave me its contact information.

What do you value about the work done by Eyes of the world in your country?

Above all its involvement in the continuous and initial training of doctors, the help to our sanitary structures with materials and consumables, its advanced strategy to manage some pathologies with a reduced cost.

Undoubtedly, IOTA is the reference in ophthalmology for Mali, but is it so for other African countries, and especially those where there is no treatment for problems related to the retina?

Thanks to the Eyes of the world Foundation, vitreoretinal surgery is a reality in IOTA, which means that many countries in the western sub-region of Africa send their patients to Mali.

This is because the Foundation has guaranteed the training of a specialist in the retina but also because it has donated a lot of material to enable this work to be carried out. Thus, today, we treat retinal detachments through vitrectomy and endovascular treatments.

How were retina problems treated before Eyes of the world began its cooperation project in Mali?

People who had economic means were evacuated in the Maghreb or Europe and the others simply became blind due to lack of means.

What are the advances that have been experienced in these years in the IOTA?

The progress is very encouraging, before the arrival in Mali of the Foundation the retinal detachment was not treated, since 2010 the classic technique of DR treatment has been put in place with satisfactory results. This year, 2013, vitrectomy was carried out with the invaluable support of Eyes of the world. In addition, the Foundation, through its contacts, has been able to help IOTA to assign a second doctor to ESASO.

We can only thank the Foundation and the Spanish State for all that they continue to do for Mali through this North-South cooperation, where its permanence is justified.