Miren Rodríguez, coordinator of Munduko begiak in the Basque Country 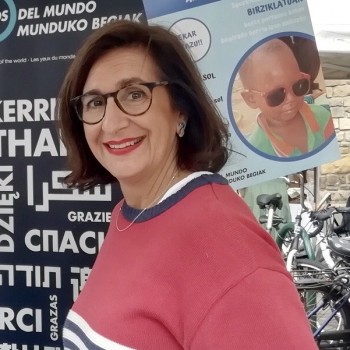 Name: Miren Rodríguez Barrenetxea
Age: 55
Profession: Coordinator of Munduko begiak - Eyes of the world, territorial delegation in the Basque Country
I was born in: Bilbao
I am in touch with Eyes of the world since: 2016

Miren Rodríguez, a historian, is coordinator of the territorial delegation of Eyes of the world in the Basque Country – Munduko begiak -, headquartered in Bilbao. An energetic, committed and always predisposed woman. Miren knows Basque society and faces with optimism and tenacity the task of bringing the vulnerability of eye health in the territories with low and medium incomes to as many people as they want to hear about it.

How did you get the proposal to coordinate Munduko begiak? Why did you accept it?

I got the proposal through a good friend of mine who is collaborator of the Foundation and knew that they were looking for someone trustworthy to take charge of the delegation in the Basque Country. He thought that I could be the right one and made the proposal to both the Foundation and me. If I had been asked to give a description of the ideal kind of work for me at the time, I would have been almost 100% in agreement with the proposal he made to me.

I accepted without any hesitation. I had guarantees that the Foundation was an honest and solid entity as well as it was managed by great professionals. And I must thank the Foundation for their trust in me even though they barely knew me.

What do you think is particular of it, different from other organizations? What attracts you the most from the Foundation?

What makes it different from other organizations in the international cooperation sector, and what makes it more attractive to me is that is concerned with a very specific field in which workers operate with a very high level of professionalism. And it is also very motivating the fact that the work done is SEEN (forgive the play on words). There is one part that is difficult to quantify, but most of the progress made is clearly visible year by year.

How have you lived these intense years as the only person hired in the Basque Country?

If I had to sum it up in one word, I would say: enthusiasm. I have worked hard without being discouraged by the mistakes made or by the closed doors that there have been. I have learnt every day, both from my colleagues and from the environment of Basque entities that work in cooperation as well as from the volunteer team. I have taken small steps but without setbacks in the work of making known the Foundation, raising awareness among the population and raising funds to support the projects.

How has the Basque society received the Foundation? What has been the interest and involvement of the people?

Basque society is constantly overwhelmed by solidarity organizations that work hard and very well. It is not easy to get their attention We have not reached (yet) great masses, but it is true that those who become aware become faithful collaborators and regular participants in our calls. There are entities of all kinds that give us what they have or what they know: from medical colleges to gastronomic societies, from optical shops to musicians, from foundations to graphic artists, designers, chefs or carriers.

Which activities have been most successful to make known the Foundation?

Whenever possible, we approach citizenship through cultural activities. We have worked during these four years on three types of initiatives: the photographic exhibitions (Eyes of Inhambane, by Elisenda Pons), the activity “Music for Your Eyes” to build awareness in diverse social collectives, and solidarity days that combine cultural activity and gastronomic proposal.

Munduko begiak addresses the Basque Country in Basque. How important do you think it is for the Foundation to express itself, whenever possible, in the languages of each territory in which it works?

It is essential. In the Basque Autonomous Community, we communicate in two languages, but we greatly appreciate the efforts of those who address us in the language that distinguishes us as a people and this helps us to maintain, strengthen and disseminate it. In order to internalize a message, it is essential to take care of the communication medium in which it is transmitted.

You often work with volunteers. What role do they play in Munduko begiak?

They are the greatest value of Munduko begiak. Without them it is impossible to reach the collectives. The human quality and level of involvement is enormous. Each one of the volunteers brings their professional knowledge and their networking and conceive new ways to approach the citizens. They advise me and offer me their support, which is so important when a worker like me is away from her companions. They generously offer the best of themselves.

What are Munduko begiak’s objectives in the medium and long term? What would be your most ambitious objective? What would you like to achieve?

Munduko begiak wants to win the trust of the main Basque institutions in the field of cooperation, especially the Basque Agency for Development Cooperation and the Basque Development NGO Coordinator. Both for what it would bring us in economic terms and because it would be the sector’s recognition of a job well done.

Raising awareness among more people is also a permanent objective. Especially in people who are reference for the population and who act as a loudspeaker for the Foundation’s message about the Right to Vision.

And finally, just as we have started working in Navarre, it would be a great achievement to be able to reach Alavese citizens.

With what three words would you define the Foundation?