Ocular health in Africa: a long road ahead 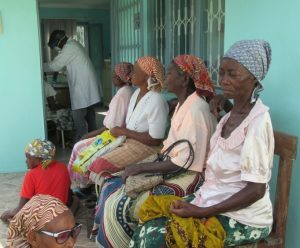 Visual deficiencies limit people in the realization of daily tasks and therefore, it affects the quality of their lives. While in developed countries most vision issues present an easy solution, in the African continent the right to access to ocular health can be denied due to socio-economic and cultural matters.

At the international level, according to the World Health Organization (WHO), the estimated amount of people with visual impairment is 253 million. From these, 36 million suffer from blindness, 217 million bear some kind of moderate or severe visual impairment, and almost 90% live in the poorest countries. Nonetheless, more than 75% of these cases can be prevented or cured.

While in countries with high or medium income, most of the main ocular pathologies are produced by the increase of diabetes cases (which usually originate diabetic retinopathy), glaucoma and macular degeneration associated with age, in regions with lower income, such as the Sub-Saharan Africa, they are cataracts (50%), glaucoma (15%), opacity of the cornea (10%), trachoma (6.8%), childhood blindness (5.3%) and onchocerciasis or “blindness of the River “(4%).

In the incidence of these pathologies, it is necessary to bear in mind the complex political, geographical, and social context of the continent, which lacks professionals specialized in ocular health, the insufficient training of the current personnel and the bad distribution of these specialists in rural and/or remote areas. In fact, Africa has a higher ocular impairment level than any other part of the world. In countries such as Ethiopia, Malawi and Nigeria, approximately 50% of the population has a risk of suffering trachoma and near 140 million people getting onchocerciasis.

At the same time, gender is a determinant health factor and the inequality of gender can deprive African women and young girls to exercise their right of access to ocular health. Unaffordable costs, fear to the treatment or distance between the residence and health facilities are added to the barriers of lack of education, limited power in decision-making in the family environment, limited financial resources of families and cultural restrictions to travel and request treatment.

Furthermore, women bear a higher risk of suffering avoidable blindness than men for biological and social reasons. Biologically, women have a longer life expectancy, increasing the risk of suffering blindness due to age-related conditions, such as cataracts, glaucoma and macular degeneration. Regarding socio-cultural factors, women are more prone to catch, for instance, trachoma, an infection that has its origin in the close contact with their daughters and sons.

In order to ensure the exercising of the right to vision and avoid people from getting blind unnecessarily because of poverty, the Foundation has three ongoing programs of cooperation in Africa: Eyes of the Sahara, Eyes of Mali and Eyes of Mozambique.

The objectives of these programs are aimed to facilitate the access to ocular health, especially among women and young girls, to boost local personnel’s training and to influence local policies regarding ocular health in the Saharawi refugee population camps in Tindouf (Algeria), the Mopti region (Mali) and the Inhambane province (Mozambique).

To use the commemoration of the Day of Africa (celebrated annually every 25th of May), which is used to raise awareness and draw attention about the situation of the of the African population, the Foundation highlights how transcendent is the fight against avoidable blindness in Africa and the importance of providing the integral, efficient and quality services that guarantee the early identification and detection, treatments and medicines for eye care and the necessary ocular assistance for the world’s most vulnerable peoples.