Eyes of the world receives the Anesvad Award to Innovation 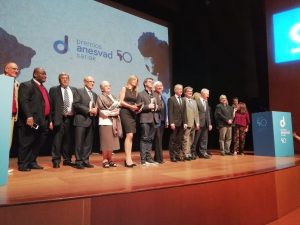 On 29th October, Anesvad Foundation hosted the third edition of the Anesvad Awards for Cooperation and Solidarity at the Guggenheim Museum in Bilbao, coinciding with the 50th anniversary of the organization.

These awards want to share synergies among all the entities that work to alleviate poverty and improve the health and development of the people and the most vulnerable ones in Africa.

This year, Eyes of the world, Afworo and Matres Mundi have been the awarded NGOs.

More specifically, Eyes of the world has been awarded in the category INNOVATE for the project “Fighting preventable blindness in Mozambique; women empowerment”, which resulted in the creation of the first optical workshop managed by a local women association in Vilankulos called AMODEVI, which contributes to guarantee the universal right to vision in the province of Inhambane.

This worskhop ensures that the rural community has access to eye care, with a special emphasis on women and girls, being the first of its kind in the district that provides prescription glasses at affordable prices ore even free for homeless people.

After only one year since it opened, the workshop is now generating profit and has produced and delivered 845 correction lenses among persons with refractive errors. The goal for this year 2018 is to increase the number of manufactured glasses.

Nuria Ramon, general manager of Eyes of the world, was the person in charge to receive the award handed by the lehendakari Inigo Urkullu. In the words of Nuria Ramon, “this award represents an important recognition to the work the Foundation does in Mozambique where, in addition to facilitate the access to ocular attention among the rural population with visual impairments in Inhambane, has also promoted women empowerment”.

The 25.000 euros of the award will be used to reinforce the ophthalmologic attention in Mozambique and to fight preventable blindness in Inhambane.