#LoveYourEyes. A day to love your eyes 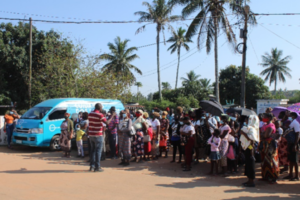 At Eyes of the world we carried out different activities to celebrate World Sight Day 2022 and contribute to raising awareness about the importance of eye health, the need to take care of our eyes (#loveyoureyes) and to fight for the eradication of avoidable blindness.

In Mozambique, we implemented eye health promotion activities in the districts of Inhambane province. In the district of Inharrime alone, 340 people were treated at the health center and talks were held in the communities with the participation of some 800 people. In addition, on October 8, a health fair was held for 124 people, mainly women vendors. As part of World Sight Day, a screening in prisons and an intensive cataract surgery campaign were also carried out at the Inhambane Hospital.

Various activities were carried out in Bolivia:

In La Paz, an ophthalmology care day was organized together with the National Institute of Ophthalmology (INO) and ORBIS, in which 300 people were attended free of charge. 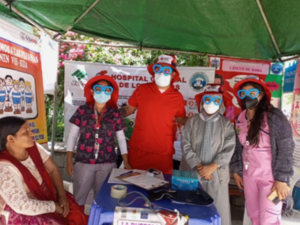 In Coroico, two activities were carried out together with Caritas Coroico, the first was an eye care and awareness fair in the municipalities of Coroico and Sorata, and the second was held in three schools in Coroico and one in Caranavi, where murals were painted with eye care motifs. Approximately 800 students were sensitized through this activity.

In Tarija, a talk was held in the Luis de Fuentes y Vargas square during which the population was made aware of the importance of eye care. In addition, 146 surgeries were performed at the Quemado Service of the San Juan de Dios Regional Hospital.

In Oruro, 310 students had their refractions measured with the support of two volunteer optometrists from the Cione Ruta de la Luz Foundation. These examinations took place in 24 rural schools and an alternative education center in Huallamarca and Machacamarca.

It is worth mentioning that in Oruro, Tarija and La Paz, walks for visual health were carried out with the participation of several public organizations and entities.

Finally, in Mali, ophthalmological consultations were carried out in the reference health centers of the health districts of Bandiagara, Bankass, Djenné, Douentza, Koro, Mopti and the Sominé Dolo Hospital in Mopti. Specifically, 350 cataract surgeries were performed and a radio awareness campaign was conducted. In addition, the Foundation’s financial support enabled the Association A Vélo Sans Age and the Friends of the Sikasso Road to provide free consultations to 150 elderly people with eye problems..